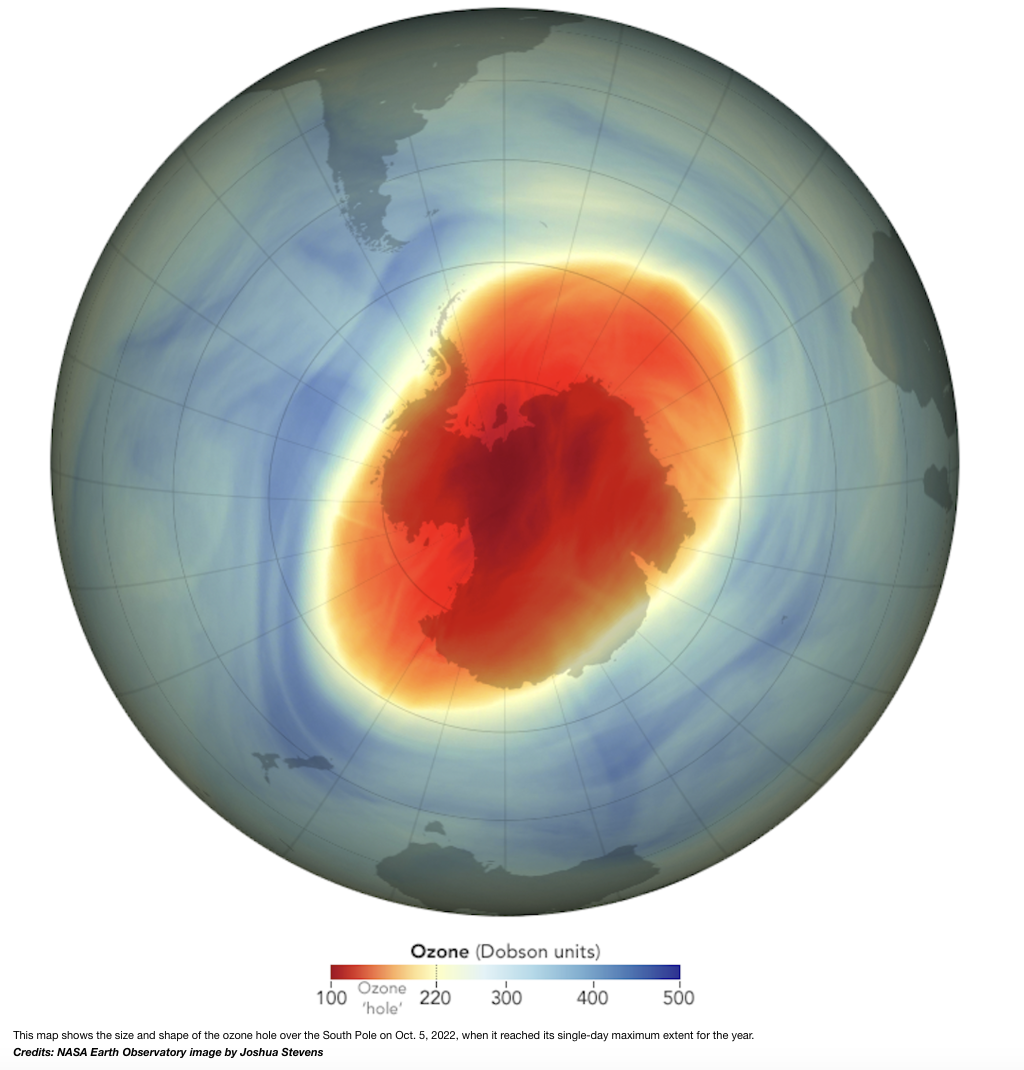 The annual Antarctic ozone hole reached an average area of 8.9 million square miles (23.1 million square kilometers) between 7 September and 13 October 2022 - around the size of North America. While this may seem alarming, the “hole” recorded was slightly smaller than last year and generally continues along an overall shrinking trend in recent years.

“Over time, steady progress is being made, and the hole is getting smaller,” said Paul Newman, chief scientist for Earth sciences at NASA’s Goddard Space Flight Center. The Antarctic ozone hole peaked at a moderately large size but experts say the ozone layer is recovering and annual variabilities are due to high altitude weather temperatures. “We see some wavering as weather changes and other factors make the numbers wiggle slightly from day to day and week to week. But overall, we see it decreasing through the past two decades,” said Paul Newman.

In the early 1980s, scientists were alarmed to find the ozone layer depleted to such an extent over Antarctica, that they referred to it as “a hole”. The reason for the concern is that the ozone layer acts as Earth’s shield blocking out almost all harmful UV radiation. Without it, increased exposure to UV radiation result in more cases of skin cancer, damaged ecosystems and impact crop yields, potentially leading to food shortages. And we were to blame.

Although ozone is created and destroyed naturally in the stratosphere, human-driven pollution destroys ozone faster than it can form. In particular, industries that use chlorine or bromine, like refrigeration and air conditioning, destroy ozone at alarmingly high rates.

Chlorine and bromine chemicals high in the atmosphere wreak havoc on the Earth’s protective ozone layer. Cold weather creates clouds that releases the chemicals. The more cold, the more clouds, the bigger the ozone hole. Hence why scientists are not concerned

The Montreal Protocol, which was adopted in 1987 in response to the discovery of the ozone hole, regulates the production and consumption of ozone-depleting substances, which has put the ozone layer on a path of recovery. And despite the ozone hole's size this year, scientists generally agree that the hole is shrinking.

Earlier this year the National Oceanic and Atmospheric Administration reported that ozone-depleting substances in the atmosphere have decreased by 50% since 1980. The report also noted that if this downward trend continues, the ozone layer could be fully repaired by 2070.