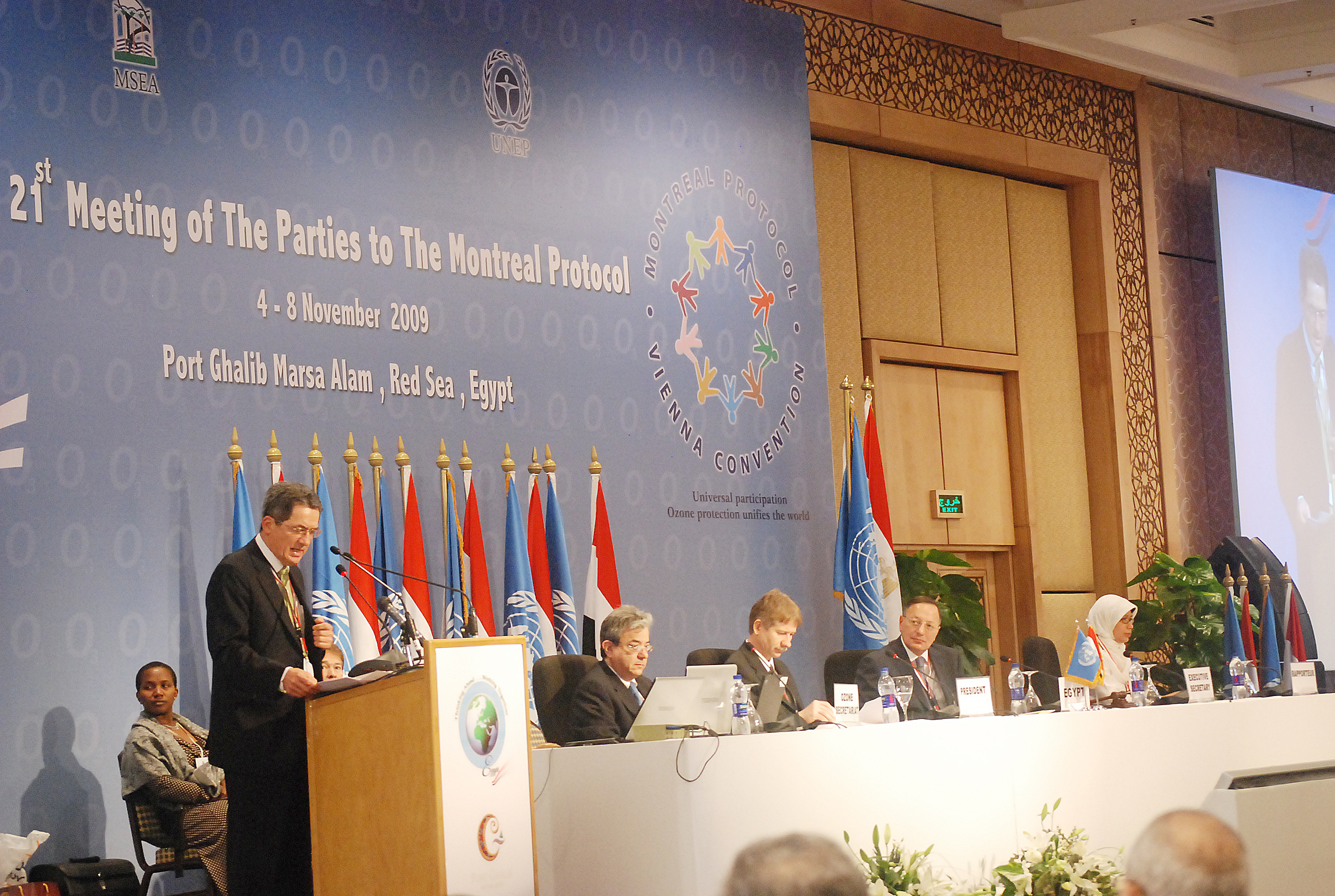 Nairobi/Port Ghalib, 2 November 2009 -- Accelerating the contribution of a treaty to protect the ozone layer towards meeting the climate change challenge will take place at the 21st Meeting of the Parties to the Montreal Protocol in the Red Sea resort of Port Ghalib, Egypt, from 4-8 November.

Representatives from over 190 countries attending the international conference will assess whether a group of synthetic gases known as hydroflurocarbons (HFCs) might be better controlled under the Montreal Protocol rather than the Kyoto Protocol, the climate change treaty.

The Montreal Protocol is the treaty established to phase-out chemicals that damage the stratospheric ozone layer, the protective shield that filters out harmful levels of the sun’s ultra violet rays.

Scientists estimate that if HFCs become the replacement chemicals of choice for another group of ozone-depleting substances, hydrochlorofluorocarbons (HCFCs), in refrigeration, mobile air conditioning units and foams over the coming decades, their contribution to global warming could rise sharply. Indeed, under one scenario, HFCs could by 2050 be contributing the equivalent of 45 percent of C02 emissions.

Achim Steiner, UN Under-Secretary General and Executive Director of the UN Environment Programme (UNEP) said: “The Montreal Protocol is without doubt one of the most successful multilateral environmental agreements. That success is underlined by the fact that for the first time in history, all countries in the world will be represented in Egypt as a result of the Montreal Protocol achieving universal ratification in 2009.”

“This universal support reflects not only the Montreal Protocol’s success in phasing out over 97 percent of the controlled substances that damage the ozone layer, but an understanding that this phase-out has also contributed in sparing the planet a significant level of global warming,” he added.

The meeting will have before them two amendments to bring these replacement chemicals under the ozone agreements. The first proposal is from Mauritius and the Federated States of Micronesia, and the second one from Canada, Mexico and the United States.

Marco González, Executive Secretary of the Ozone Secretariat said: “The 21st Meeting of the Parties will address important issues for the protection of  the ozone layer and related efforts to further contribute to mitigate climate change. The sound environmental management of existing banks of ozone depleting substances as well as the proposed amendments to address HFCs under the Montreal Protocol are clear signals of the Parties’ new initiatives to address both issues.”

Mr. Steiner noted that the increased use of HFCs as replacement chemicals now represent a new challenge in terms of climate change.  He added: “I look forward to a full and frank discussion on what countries consider the next steps and the best way forward to address these high global-warming potential gases. Port Ghalib must send a clear signal that nations are determined to rapidly find not only ozone-friendly but also climate friendly alternatives and to assist developing economies in accessing these.”

These discussions on the proposals come some four weeks before nations gather in the Danish capital city of Copenhagen for the crucial UN Climate Change Convention (UNFCCC) talks.

Other Issues in Port Ghalib

Under the Montreal Protocol, a global phase-out of chloroflurocarbons (CFCs) is scheduled to be completed by 31 December 2009. Some countries with older manufacturing facilities have sought exemptions for the continued use of pharmaceutical-grade CFCs in metered dose inhalers used by people with asthma until their factories have been upgraded to non-CFC manufacturing.

However, there is concern among some developing countries that sources of pharmaceutical-grade CFCs may disappear in 2010.

The meeting will consider various proposals to keep some supplies in place until all manufacturing facilities have been upgraded to making non-CFC inhalers.

Delegates will also examine the use of the pesticide methyl bromide in fumigating shipments around the world. While methyl bromide is controlled under the Montreal Protocol for use in locations such as farms, its use in quarantine and pre-shipment of, for example, wooden pallets falls outside the treaty.

Some governments and experts have become concerned that its uncontrolled uses may be contributing to harming the ozone layer.

Uncontrolled Use of Fumigants

The meeting in Port Ghalib will discuss new findings from the Montreal Protocol’s Technology and Economic Assessment Panel (TEAP). These indicate that consumption of methyl bromide for quarantine and pre-shipment purposes has averaged around 11,000 metric tonnes a year since 1995.

The workshop, being conducted in collaboration with the International Plant Protection Convention, will assess alternatives for treating shipments of grains, vegetables, logs and other materials.

Heat treatment and treatment using other non-ozone damaging fumigants may be available as alternatives to using methyl bromide.

The 21st Meeting of the Parties to the Montreal Protocol will take place in Port Ghalib, Egypt from 4 to 8 November 2009. For more information and supporting documentation please visit http://www.unep.ch/ozone/Meeting_Documents/mop/21mop/index.shtml or

The Large Contribution of Projected HFC Emissions to Future Climate Forcing: Proceedings of the National Academy of Sciences June 2009 http://www.pnas.org/content/early/2009/06/19/0902817106.full.pdf+html