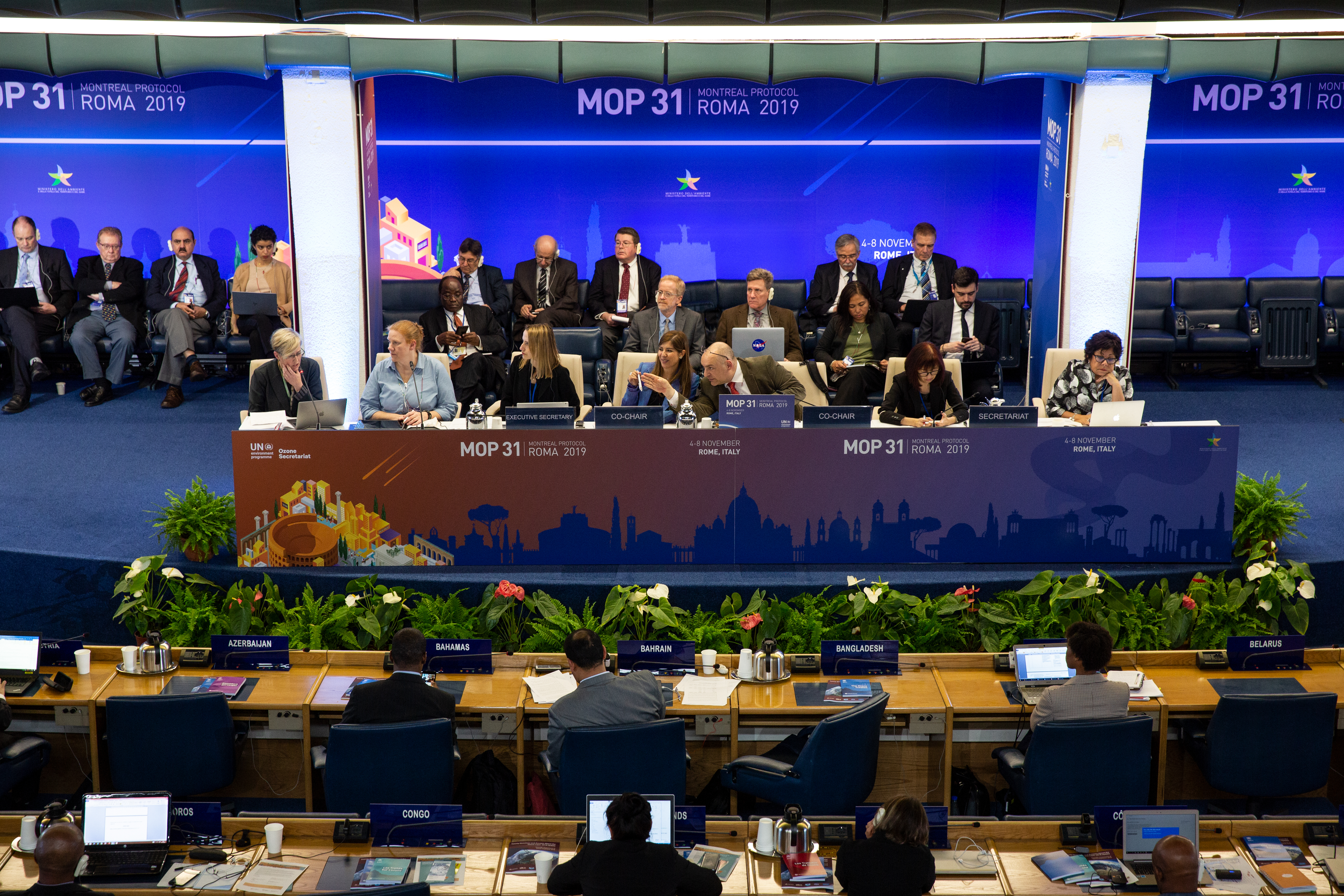 Rome, 8 November 2019 – Delegates representing 171 parties to the Montreal Protocol concluded their Thirty-first Meeting of the Parties in Rome, Italy, from 4 to 8 November, with a number of key decisions based on rounds of negotiations.

Main issues included:
CFC-11: An update from the Scientific Assessment Panel (SAP) highlighting preliminary data with new scientific information showing reductions in emissions of trichlorofluoromethane (CFC-11) in 2018 and 2019. The issue of unexpected emissions of CFC-11 was brought to the attention of the parties in 2018, revealing that global emissions of CFC-11 had increased in the period after 2012.The parties agreed on a decision, including among others, actions to discover and prevent any illegal production or consumption of controlled substances.

2022 Quadrennial Reports: The three Assessment Panels to the Montreal Protocol were requested to prepare quadrennial assessment reports to be submitted by the end of 2022 for consideration by the parties. The panels were requested to pay particular attention to assessing the state of the ozone layer, the interactions between ozone and climate, the effects of changes in the ozone layer to human health and ecosystems, as well as alternative technologies to the controlled substances.

Other issues included the laboratory and analytical uses of ozone-depleting substances whereby the parties agreed to extend the global exemption beyond 2021 with monitoring. Critical use exemptions were granted to a few parties that requested to continue using small amounts of methyl bromide in agriculture.

Parties also undertook discussions on practical arrangements including the approval of the budget for 2020, as well as the membership of Montreal Protocol bodies for 2020. They also memorialized that 88 parties have ratified the Kigali Amendment, which came into force on 1 January 2019. The Amendment is expected to avoid 0.4°C of future global warming by the end of the century by cutting hydrofluorocarbons (HFC) by more than 80 per cent over the next 30 years.

The synergies between the Montreal Protocol, the Kigali Amendment and Sustainable Development Goals (SDG) were further underlined by the high-level roundtable discussion on the contribution of the Montreal Protocol to the development of sustainable cold chains and the reduction of food loss. The same issue was underscored in the Rome Declaration. Signed by 76 parties to date, the Declaration recognizes the importance of the Protocol and its Kigali Amendment in raising awareness for developing sustainable and efficient solutions in the cold chain.

In his opening statement at the high-level segment, the Italian Minister of the Environment, Land and Sea Protection, Sergio Costa, urged the parties to work together “to shoulder our responsibilities to ensure the protection of the environment for the future”, while Cardinal Pietro Parolin, on behalf of His Holiness, Pope Francis, noted the Montreal Protocol was an example of how cooperation can “achieve important outcomes, which make it simultaneously possible to safeguard creation.” Inger Andersen, UNEP Executive Director, underscored the interconnectedness of environmental challenges, stating “nothing short of universal ratification of the Kigali Amendment is acceptable.”

The overarching themes of cooperation, mutual respect, consensus building in the pursuit of ozone protection, safeguarding the environment and the well-being of humanity was underscored by Tina Birmpili, Executive Secretary, Ozone Secretariat. Reiterating the importance of working together, the need to remain vigilant and to react swiftly to address issues such as the recent unexpected increase in CFC-11 emissions, she noted that collectively “we must turn our minds to what more we can do to address climate change and biodiversity and ecosystem loss – the biggest challenges humanity faces right now.”

About the Montreal Protocol
The Montreal Protocol is a global agreement to protect the Earth’s ozone layer by phasing out the chemicals that deplete it. The landmark agreement entered into force in 1989 and it is one of the most successful global environmental agreements. Thanks to the collaborative effort of nations around the world, the ozone layer is on its way to recovery and many environmental and economic benefits have been achieved.