Large ozone hole recorded over Antarctic for 2020, but Montreal Protocol efforts have minimized the damage 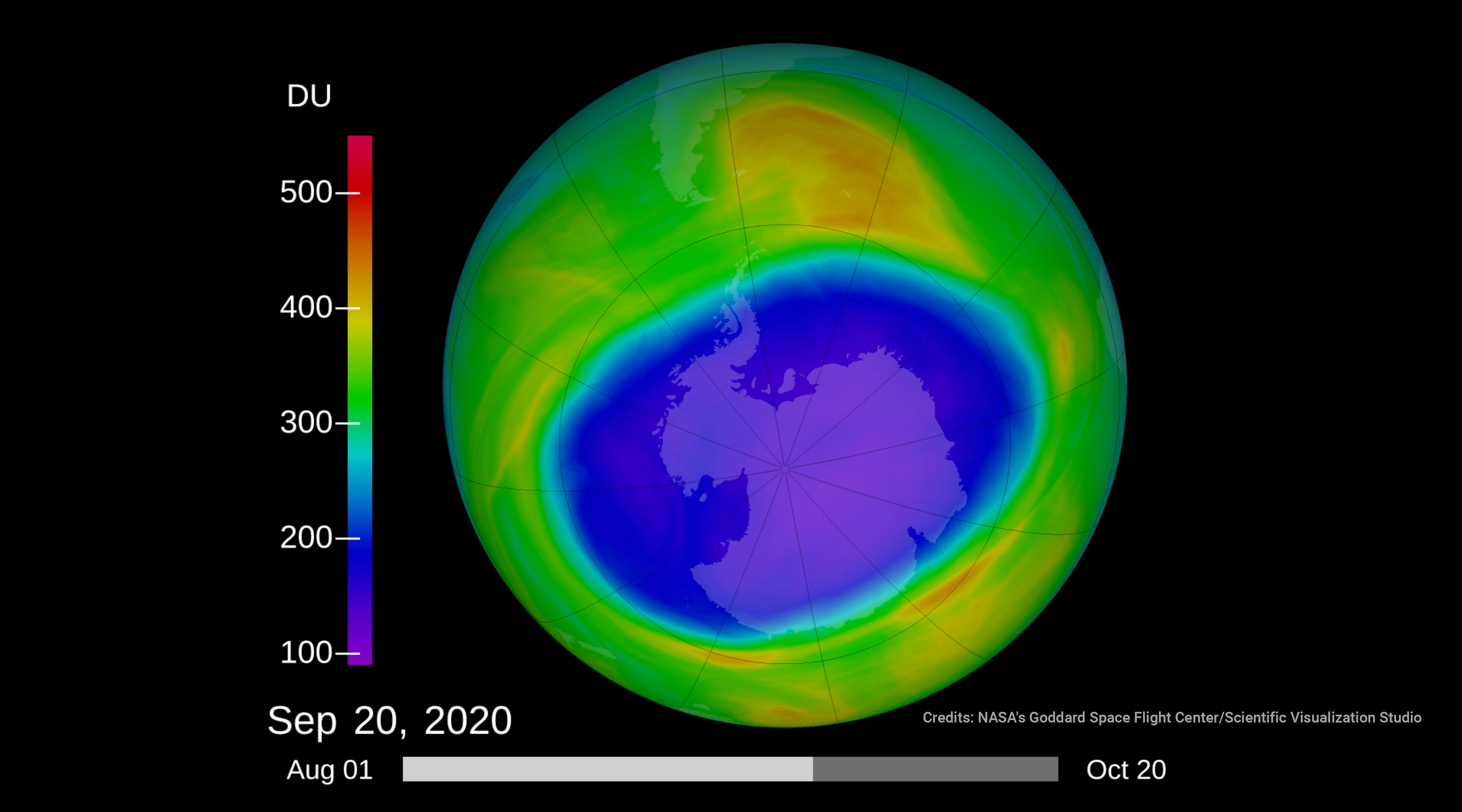 Cold temperatures and strong winds combined to create one of the deepest and largest holes in the ozone layer in recent years, but efforts to phase down ozone-depleting chemicals mean the hole is much smaller than it could have been, scientists from NASA and the National Oceanic and Atmospheric Administration (NOAA) said today.

NASA and NOAA track the ozone layer throughout the year and determine when the hole reaches its annual maximum extent. The annual ozone hole for 2020 reached its peak at about 9.6 million square miles (or 24.8 million square kilometres), roughly three times the size of the United States, on 20 September. Similarly, measurements from the European Space Agency confirm the same as of 2 October this year.

The small hole in 2019 came as a result of warm temperatures in the stratosphere and a weak polar vortex. These conditions stopped the formation of polar stratospheric clouds, within which ice crystals catalyse the destruction of ozone, with the help of sunlight. However, declines in levels of ozone-depleting chemicals controlled by the Montreal Protocol prevented the 2020 hole from being as large as it could have been.

“From the year 2000 peak, Antarctic stratosphere chlorine levels have fallen about 16 per cent towards the natural level,” said Paul A. Newman, chief scientist for Earth Sciences at NASA's Goddard Space Flight Center in Greenbelt, Maryland. "The hole would have been about a million square miles larger if there was still as much chlorine in the stratosphere as there was in 2000.”

The Montreal Protocol was set up in 1987 to protect human health and the environment by closing the hole in the ozone layer. With the universal support of 198 nations, the Montreal Protocol led to the phase-out of almost 99 per cent of ozone-depleting substances.

While the measurements this year may seem worrying, the overall trend is towards the ozone hole slowly closing. Estimates say that it will return to pre-1980 levels by mid-century.

Annual fluctuations in ozone levels, within the downward trend, are predominantly due to weather conditions.

During the Southern Hemisphere spring season (August - October) the ozone hole over the Antarctic increases in size, reaching a maximum between mid-September and mid-October. When temperatures high up in the atmosphere (the stratosphere) start to rise in late Southern Hemisphere spring, ozone depletion slows, the polar vortex weakens and finally breaks down, and by the end of December ozone levels have returned to normal.

So, while the current ozone hole area is one of the largest ones recorded to date, the atmospheric abundances of anthropogenic ozone-depleting substances continue to decline. Parties implementing the Montreal Protocol have also positively impacted ozone levels, with upper stratospheric ozone levels increasing 1 to 3 per cent every ten years since 2000.

However, levels of ozone depleting substances in the stratosphere remains high enough to produce significant ozone loss, demonstrating their long life and the need for continued vigilance and efforts under the Montreal Protocol to prevent any illegal emissions of ozone-depleting substances.

For a more in-depth analysis of the state of the ozone for 2020 and the work of both NASA and NOAA please visit: