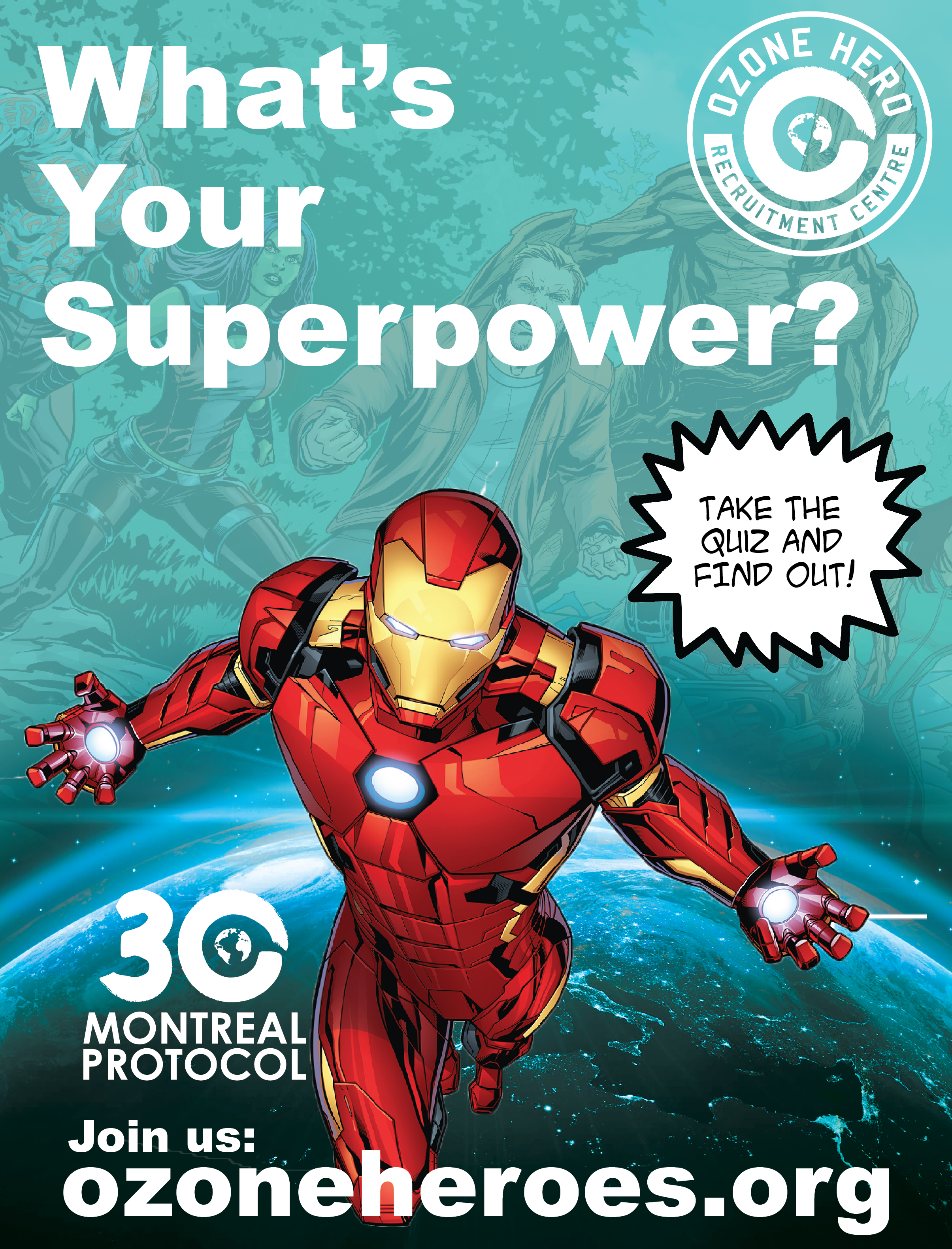 In honour of the 30th anniversary of the landmark Montreal Protocol on Substances that Deplete the Ozone Layer, the Ozone Secretariat at UN Environment and the global community are launching a public engagement campaign to celebrate the international agreement’s success in protecting Earth against ozone depletion and mitigating climate change.

The Ozone Heroes campaign seeks to inspire the same collaborative energy that propelled the Montreal Protocol’s mission and led to its continued success in protecting all life on Earth.

The campaign created by the Ozone Secretariat in partnership with Marvel, the company behind some of the world’s most beloved superheroes, will commence on 15 September, on the eve of World Ozone Day in Montreal, Canada, where world leaders first gathered 30 years ago to take action to stop the thinning of the earth’s ozone layer.

"Thirty years ago the world proved it can come together and tackle a global problem with global resolve. The result is that the shocking damage to the ozone layer was halted, and today there are signs it is recovering," said Erik Solheim, head of UN Environment.

"But this planet-saving work does not stop here, and now is not the time to rest on our laurels. The Montreal Protocol is as necessary today as it was in the 1980s, not just for the ozone layer but also as part of global efforts to halt climate change. Our continued success depends on the emergence of a new generation of heroes."

"The ozone story continues to inspire. It shows what can be achieved if we listen to the science, put aside our differences and act on behalf of our planet," said Tina Birmpili, head of the Ozone Secretariat. "Life on earth as we know it today is because 30 years ago, nations across the globe came together and showed that everything is possible. Our message today is that this must not just be a one-off."

The Ozone Secretariat /UN Environment and the Government of Canada will co-host the 30th anniversary celebration and Ozone Heroes campaign global launch event on 15 September at Montreal’s Centre for Sustainable Development from 1:30pm to 2:30pm EST. The celebration is open to the public and is free to attend.

Canada’s Minister of Environment and Climate Change Catherine McKenna and the European Union Commissioner for Climate Action and Energy Miguel Arias Cañete will preside over the event to be attended by UN representatives, scientists, policymakers, environmentalists and special guests.

“The Montreal Protocol is a global success story of people coming together to overcome one of the greatest environmental threats in recent history. Now, 30 years later, we see the world coming together under the Paris Agreement, to take strong, decisive action on climate change. As we face the greatest threat of our generation, I am proud that Canada is once again taking a leadership role at home and abroad to address climate change and support clean economic growth,” said McKenna.

Commissioner Arias Cañete said: "The European Union continues to be a strong supporter of the Montreal Protocol which has effectively eliminated the use of ozone depleting chemicals in Europe. It has also mitigated many billions of tonnes of CO2 and last year's Kigali Amendment shows that the global community continues to work together to tackle climate change and implement the Paris Agreement."

The Ozone Heroes  campaign comes at a time when international collaboration is required in order to address pressing global issues and hopes to illuminate the ways in which human partnership can solve these issues as it did for the depletion of the ozone layer.

The campaign journey follows the Guardians of the Galaxy and Iron Man as they discover humans are the heroes who solved the global crisis of ozone depletion. The campaign serves to emphasize that our human qualities are what equip us to solve the world’s most pressing problems.

Everyone is invited to join the celebration of the 30th anniversary of the Montreal Protocol by participating in the campaign by visiting www.ozoneheroes.org where one can discover his or her own ozone superpower.

The Montreal Protocol has led to the phase-out of more than 99 per cent of nearly 100 ozone-depleting chemicals and significantly contributed to climate change mitigation. It has also garnered support from 197 parties, making it the first and only environmental treaty in the history of the United Nations to achieve universal ratification. As of today, the ozone layer is showing signs of healing and is set to recover by the middle of the century.

In addition, the Protocol has contributed significantly to the mitigation of climate change by averting more than 135 billion tonnes of carbon dioxide equivalent emissions (as some ozone-depleting substances are also powerful greenhouse gases) in the atmosphere from 1990 to 2010.

Building on this success, parties to the Protocol agreed last year under the Kigali Amendment to phase down hydrofluorocarbons (HFCs), a group of chemicals that do not deplete the ozone layer but are powerful greenhouse gases and, thus, catalysts of climate change. Phasing down HFCs under the Protocol is expected to avoid up to 0.5°C of global warming by the end of the century, while continuing to protect the ozone layer.

Fulfilling the objectives of the Protocol called for unprecedented global collaboration and collective action.