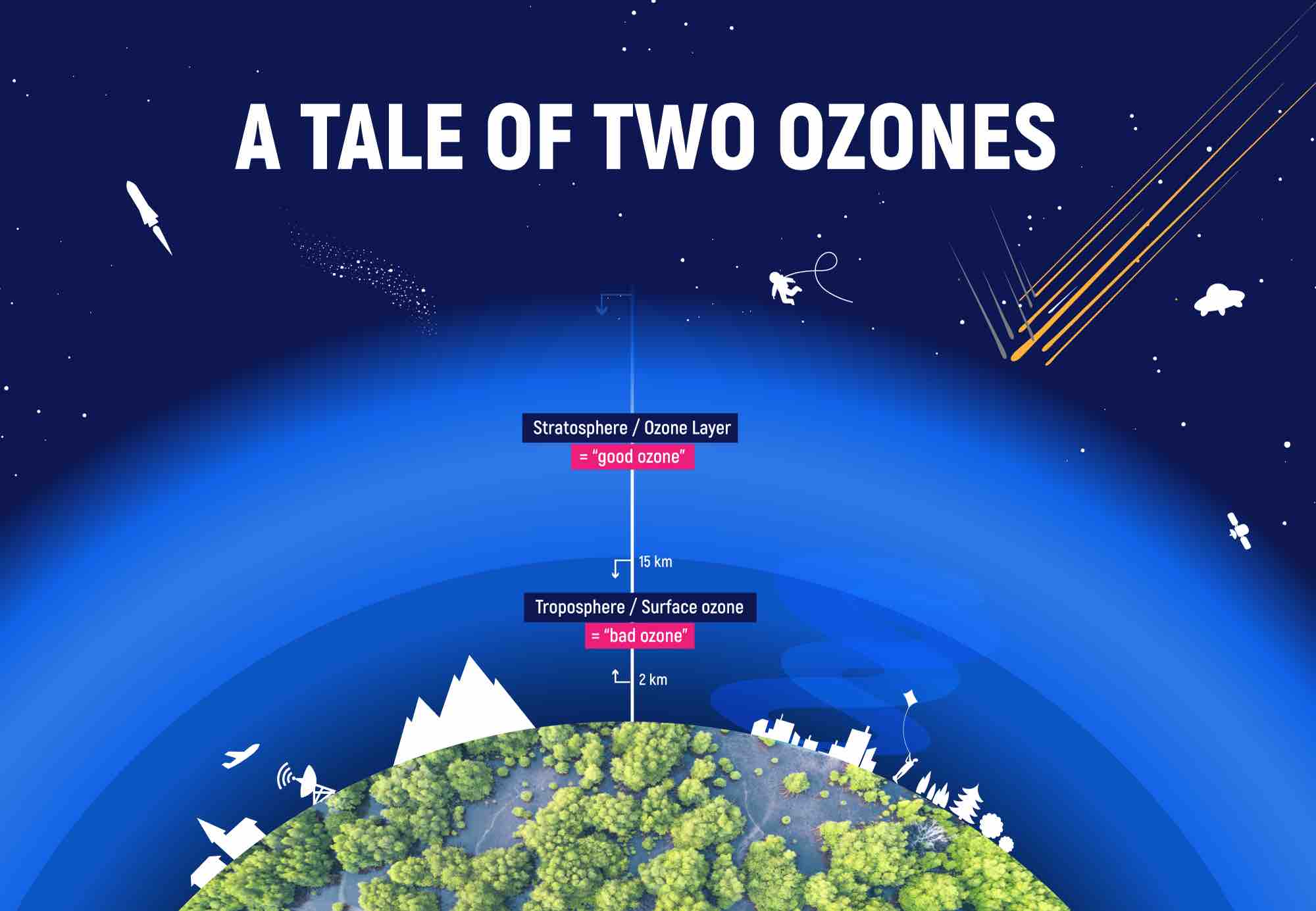 A Tale of Two Ozones

The ozone layer high in Earth’s atmosphere, known as stratospheric ozone, protects human health, crops and ecosystems from damage caused by too much ultraviolet (UV) radiation. But lower down in the atmosphere, the troposphere, the scenario is different. Here, human activities can cause too much ozone, threatening human health, crops and ecosystems.

Ozone (O3) is a gas that is produced naturally in the atmosphere from oxygen (O2). Most ozone in Earth’s atmosphere occurs in the ozone layer in the stratosphere – around 15km above the ground.

Ozone here forms the ozone layer, which serves as a natural shield against the sun’s most harmful rays. It was the depletion of this ozone that caused so much concern in the 1970s and 1980s, when scientists discovered that gases used in aerosols and the cooling industry, such as chlorofluorocarbons (CFCs), were causing a huge seasonal hole. The nations of the world signed up to the Montreal Protocol to phase down these gases. The agreement was a huge success, and now the ozone layer is healing. This is good news for the planet, as it prevents cases of cancer and cataracts, and protects crops and ecosystems.

But there are two sides to the ozone coin. There is also another ozone – “bad ozone”. This is the 10 per cent of ozone in the atmosphere nearest to the Earth’s surface – the troposphere. Most tropospheric ozone is in the lowest 2-3 kilometres, so it is also referred to as “surface ozone”. Surface ozone is described as bad ozone because at high concentrations it poses a threat to human health, crop production and natural vegetation, including forests.

In 2010, the Environmental Effects Assessment Panel (EEAP) reported that 1-1.25 million deaths globally could have been attributed to surface ozone pollution. While long-term exposure to high levels of surface ozone may contribute to cardiovascular diseases –including high blood pressure, heart disease and stroke – the best-known link is with respiratory diseases.

Breathing in ozone causes inflammation and damage in the airways and lungs. This can lead to problems even in people without any pre-existing respiratory diseases, but it is more harmful to those with existing conditions. Globally, as many as 20 per cent of total asthma-related emergency room visits may be down to surface ozone. In their 2020 update report, EEAP also noted initial evidence that high levels of air pollution may be associated with worse health outcomes from COVID-19 infection.

Effects on crops and vegetation

Many plants, from lichens to forest trees, are damaged by exposure to surface ozone. Estimates of global yield losses in soybean, wheat, rice and maize due to surface ozone range from 4-12 per cent. Some studies find even greater yield reductions in some areas, for example up to 24 per cent in rice and 36 per cent in wheat. High concentrations of surface ozone also damage the growth and productivity of forests. This reduction in growth reduces the ability of forests to absorb carbon dioxide, including that produced by human activities – a major driver of climate change.

How surface ozone is produced

Very low concentrations of surface ozone occur naturally in even the cleanest air, but much higher amounts can be produced in polluted air. Ozone is produced by chemical reactions between a cocktail of air pollutants that we produce, including nitrogen oxide (NOx), carbon monoxide (CO) and hydrocarbons. Higher temperatures and bright sunlight accelerate these reactions, so surface ozone concentrations are usually highest under warm, sunny conditions.

Overall, surface ozone tends to be greatest in urban areas where emissions from industry and transport result in high concentrations of NOx and hydrocarbons. Surface ozone may then be dispersed from urban to rural areas by the wind.

Unlike the Montreal Protocol, which protects good ozone, there is no global treaty that protects us from the effects of bad ozone. However, many countries include surface ozone as part of their air quality standards and clean air regulations – such as limiting and regulating emissions from industry, power stations and from vehicles, and measures to limit the emissions of hydrocarbons such as organic solvents and unburnt vehicle fuels.

So, while there is only one type of ozone, depending on where it is located – either in the stratosphere or troposphere – it will have very different effects on humans, crops, animals and ecosystems. It’s important, therefore, to note this distinction. We need to make sure that we continue to implement the Montreal Protocol to protect the “good ozone” found in the stratosphere that is our sunshield.

However, combatting emissions and pollution, to reduce the “bad ozone” at the lower-level troposphere, which is detrimental not just to our health, but animals and plants too, is another tale altogether. 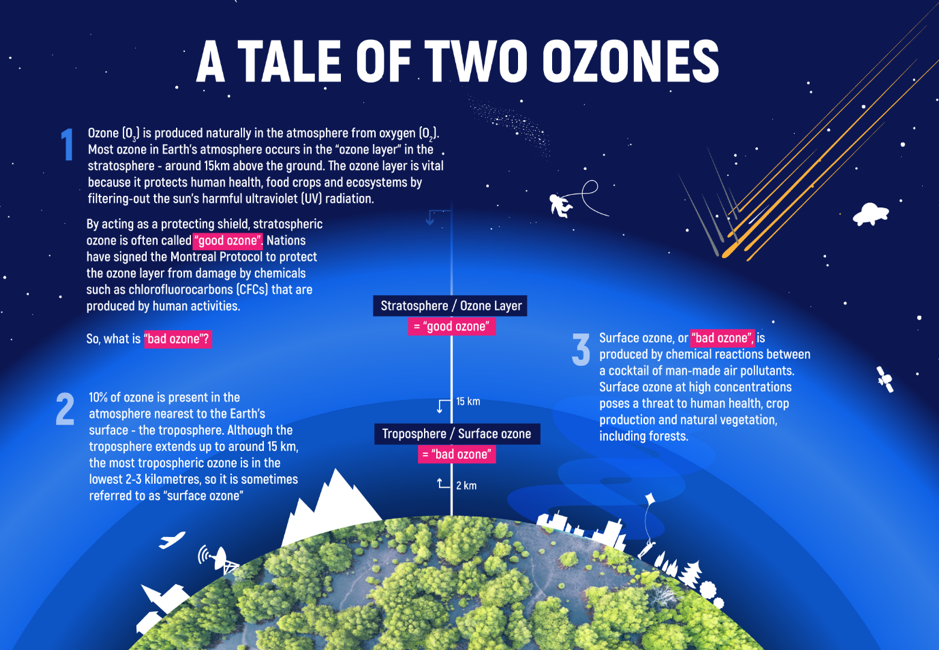