Record Stratospheric Ozone Loss in the Arctic in Spring of 2011 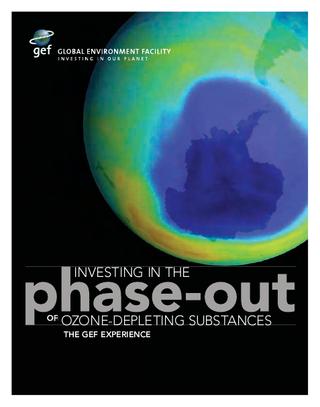 Montreal/Nairobi, 22 September 2007--An historic agreement to tackle the twin challenges of protecting the ozone layer and combating climate change has been agreed by governments.

Nations signed up to an accelerated freeze and phase out of substances known as hydrochlorflurocarbons (HCFCs) under the 20 year-old Montreal Protocol-- the UNEP treaty established in 1987 to protect the Earth’s ozone layer from chemical attack.

The decision, including an agreement that sufficient funding will be made available to achieve the strategy, follows mounting evidence that HCFCs contribute to global warming.

HCFCs emerged as replacement chemicals in the 1990s for in air conditioning, some forms of refrigeration equipment and foams following an earlier decision to phase-out older and more ozone-damaging chemicals known as CFCs or chloroflurocarbons.

Governments meeting in the Canadian city agreed at the close to freeze production of HCFCs in 2013 and bring forward the final phase-out date of these chemicals by ten years.

The acceleration may also assist in restoring the health of the ozone layer—the high flying gas that filters out damaging levels of ultra violet light—by a few years too.

Achim Steiner, UN Under-Secretary General and UNEP Executive Director, praised the decision taken at the 20th anniversary celebrations of the Montreal Protocol calling it an ‘important and quick win’ for combating climate change.

“Historic is an often over-used word but not in the case of this agreement made in Montreal. Governments had a golden opportunity to deal with the twin challenges of climate change and protecting the ozone layer—and governments took it. The precise and final savings in terms of greenhouse gas emissions could amount to several billions of tonnes illustrating the complementarities of international environmental agreements,” he said.

Mr Steiner also congratulated the government of Canada and John Baird, the Canadian Environment Minister, for hosting a successful meeting.

He said the spotlight now moves to New York where, on 24 September, the UN Secretary- General Ban Ki Moon is hosting a Heads of State meeting on climate change.

The meeting will help to build confidence in the run up to the UN climate convention negotiations scheduled in Bali, Indonesia, in December. Here nations need to get down in earnest to negotiate an international greenhouse gas emissions reductions agreement to kick in post-2012.

Mr Steiner said:” I believe the agreement and the spirit of Montreal can build confidence in the United Nations as a platform for negotiating effective agreements for addressing the environmental challenges of our time”.

“Montreal underlines that when nations are united they can achieve a great deal and on multiple fronts. It also underlines how international treaties—in this case the UN’s Montreal Protocol and the UN Framework Convention on Climate Change—can deliver far more when we build on the scientific consensus and mobilize the technological and economic means to act,” he added.

John Baird, Canada’s Environment Minister, added: “The Montreal Protocol, already considered the most successful environmental agreement to date, delivers once again, to protect the ozone layer as well as the most pressing issue of our time—climate change. Today’s announcement demonstrates the kind of concrete action citizens around the world are demanding”.

The Agreement on HCFCS

HCFCs, which also damage the ozone layer but less than CFCs, were always planned as interim substitutes and were due to be phased out in 2030 by developed countries and in 2040 by developing ones.

However in recent years and months mounting evidence has emerged on the growth in HCFCs and the potentially significant benefits arising in terms of combating climate change and ozone loss if an accelerated freeze and accelerated phase-out could be achieved.

Experts estimate that without this week’s agreement, production and consumption of HCFCs may have doubled by 2015 adding to the dual challenges of ozone depletion and climate change.

Here in Montreal six proposals were put before governments from both developed and developing countries. They represented a variety of options including the freeze dates; reduction steps towards a final and accelerated phase out.

Industry experts had indicated that, should an agreement be taken this week in Montreal, this would send a strong signal resulting in the rapid development of replacement chemicals and technologies.

The final agreement is a combination of the various options proposed by Argentina and Brazil; Norway and Switzerland; the United States; Mauritania, Mauritius and the

Federated States of Micronesia. Under the agreement, productions of HCFCs are to be frozen at the average production levels in 2009-2010 in 2013.

Developed countries have agreed to reduce production and consumption by 2010 by 75 per cent and by 90 per cent by 2015 with final phase out in 2020.

It was also agreed that a small percentage of the original base line amounting to 2.5 per cent will be allowed in developing countries during the period 2030-2040 for ‘servicing’ purposes.

Essentially this means that some equipment, coming towards the end of its life such as office block air conditioning units, could continue to run on HCFCs for a few more years if needed.

The 191 Parties to the Montreal Protocol—190 countries plus the European Commission—also made an agreement on financing.

The Protocol’s financial arm—the Multilateral Fund—which to date has spent over $2 billion to assist developing country reductions comes up for replenishment next year. The new agreement takes into account the need for ‘stable and sufficient’ funds and the fact that there may be ‘incremental costs’ for developing countries under the accelerated HCFC freeze and phase out.

Governments agreed here to commission a short study by experts to fully assess the likely costs of the acceleration. They will report back early in 2008 and inform parties on the suggested sums required for the new replenishment.

Marco Gonzalez, Executive Secretary of UNEP’s Ozone Secretariat, said: “The progress achieved over 20 years and continued this week demonstrates to the world that developed and developing countries can work together to meet global challenges. Here this week numerous nations including China, India, the United States and the European Union, demonstrated the art of the possible and solidarity in advancing the international environmental agenda on both ozone and now increasingly on climate change”.

Methyl bromide, a pesticide and ozone depleting substance, was meant to be fully phased-out by developed countries in 2005.

But ‘critical use exemptions’ have been granted because some farmers producing products such as strawberries and cucumbers to tomatoes and eggplants argue that alternatives are either not ready or cost effective for all circumstances.

Here in Montreal, governments approved just over 4,600 tonnes continuing the downward trend in critical use exemptions for developed countries.