Unusual conditions over the Arctic 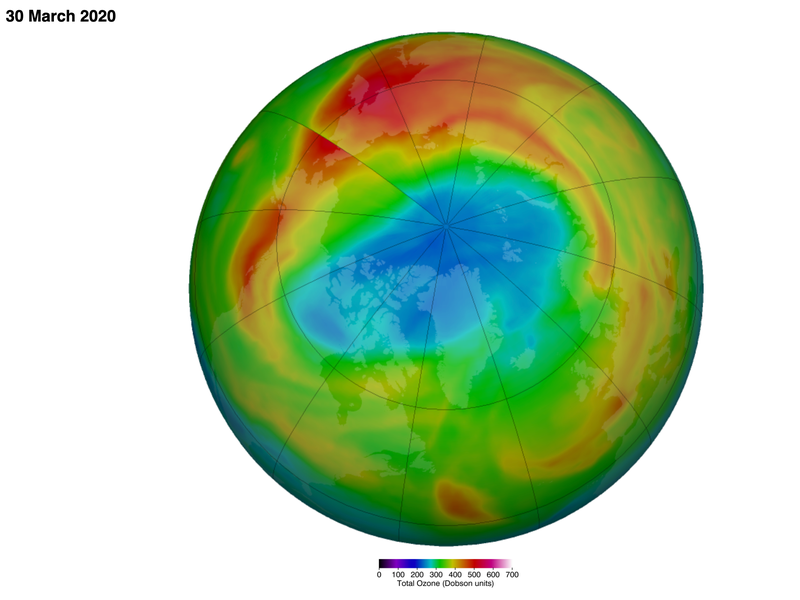 Recent maps of the Arctic hemisphere created with satellite data, show a significant ozone layer depletion over the North Pole growing in size from late last year. So big and unusual is this, that it has been compared with the recurrent Antarctic ozone hole.

Each year in the Antarctic winter, the extreme low temperatures create high altitude clouds, which combined with halogens (chemicals such as chlorine and bromine which come from refrigerants and other industrial sources), as well and sunlight, lead to a reduction in ozone in the South Pole. This is well-known and is why scientists monitor this depletion annually. Last year, for example, the Antarctic ozone hole was quite small (the smallest since records began in 1982) as temperatures in the low stratosphere above the Antarctic were higher than normal.

But the atmospheric conditions in the Arctic are different. In contrast to the Antarctic, temperatures as cold as Antarctic are rare in the Arctic. However, this year, scientists say, the extreme low temperatures in the North Pole trapped cold air in a ‘polar vortex’ within which high altitude clouds formed, catalyzing the ozone destroying reactions.

What can be expected now, is the normal seasonal temperature rise which will see the depletion diminish over the coming weeks. The unusually large depletion of the Arctic ozone layer was due to extraordinary atmospheric conditions. This year’s Arctic ozone depletion has been exceptional, rather than the norm.

Overall, scientists note a decline in halogens in the atmosphere and the start of ozone recovery, also confirmed by the recent study by Ananta Banerjee - A pause in Southern Hemisphere circulation trends due to the Montreal Protocol – featured in Nature and available on the Ozone Secretariat’s website Resources page.